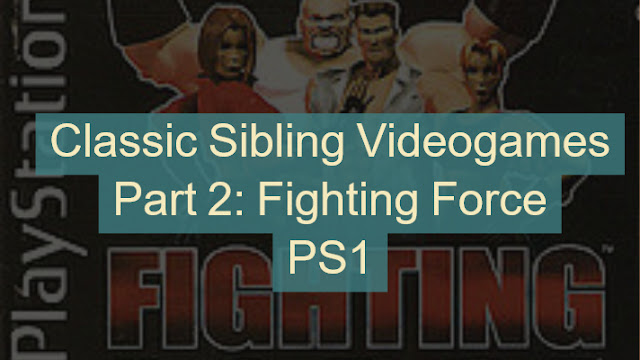 Fighting Force on PS1 received mix reviews and I understand why.

My brother still talks about the fun we had playing this game. Which is weird considering I remember it differently. This classic beat em up might be one of the few videogames we bonded over, but I don't remember liking it as much as he did.

This series is about videogames my brother and I played together growing up. As we grew older my brother became less of a gamer and more of a passive onlooker. It's rare for him to want to join in on anything I am playing. When he does, it's only for a brief moment.

PS1 had a few games we could both play together at a young age; fortunately, Fighting Force is one of them. At the time he must've been 6 and I was 10. Beat em ups in nature are easy to pick up at any age. Fighting Force is no exception to this.

The wheel was not reinvented

Choose among 4 characters, 2 guys and 2 girls, to stop a mad scientist from destroying the world because the apocalypse is supposed to happen-but really it's not-so he chooses to do destroy it himself.

Dr. Zeng predicted the world to end in the year 2000. January 1 comes along and his prediction was wrong. He believes something kept the apocalypse from happening so he must correct everything by destroying the world himself.

What I remember is always choosing the larger character, Smasher, while my brother chose the faster one, Hawk; however, I don't remember much of the story. 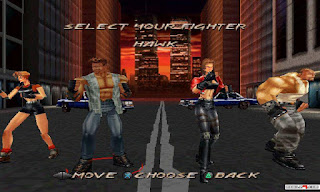 Graphically passable even today. The game looks great for being released in 1997. Core, the company who developed the game, hired 10 Japanese EA coders to help with the game. EA has been a powerhouse for a long time, especially in graphic design. To me, EA understands that lighting is important. No need to be blacked out to look gritty.

Speaking of gritty, I believe the game is supposed to have a gritty, futuristic vibe to it. I get that feeling from the soundtrack.  Not so much the level design.

Streets of Rage had the right idea with using various weapons. Fighting Force expanded on this idea by including knives, rocket launchers, and soda cans. Trusty soda can. 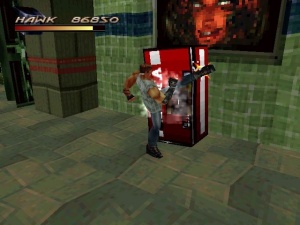 Seriously, there is a large number of weapons. What makes them better is using them in a 3D space. Unlike beat em ups until that point, you had limited range. Attacking was linear as in you had to fight face to face. Moving in all directions now  creates freedom for your character.

Plus it's awesome shooting a rocket into an enemy's chest.

Here's the thing, as fun as all that may be, it was too difficult for my brother and me. Getting past the first few stages was difficult and kept us from enjoying the game as much as we should've.

Believe me, we tried. Lot's of times.

Eventually, we put the game down and never picked it back up because of the difficulty.

Last year my brother got an itch to play that game. For whatever reason, he felt like he needed to beat it.

But something happened that neither one of us expected.

It was like we were kids. Yelling at the TV about how we were being cheated and still wanting to give it another try. Years went by since we played that game together. Here we were, reliving our childhood.

Needless to say, we cheated and made our way to the final boss only to beat the game and not even care that we did. It wasn't the completion of the game that made us content, but the nostalgia.

Fighting Force is a mediocre game that only matters if you played it at the right age at the right time. Other than that, you can live your life without it.

You better believe we were downing tall cans. Of what? No idea. I would imagine that Smasher and Hawk are Miller fans. But fancy Miller fans. Get you some Miller High Life and play something else.