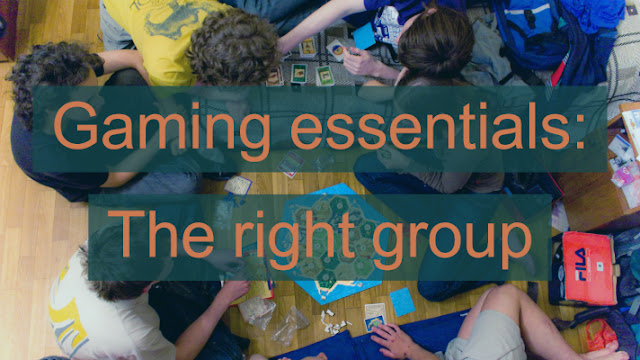 The right group can make or break a gaming session. Online or offline.


Solo gamers need not apply. We are talking about group play. If you play alone or don't have a group, then feel free to catch up with part one and two and wait for part four. I want to talk about how the right group can make the night better or ruin it.

First let's get the bad out the way. Read Gandors advice about people being dicks to understand where I'm coming from. The whole group doesn't have to be a dick, but more than one can ruin everything.

"I don't want to play that."
"You can't do that."
"Let's play something else."
Other obnoxious bullshit Gandor mentioned.

The group can turn on itself. From playing nice to undermining game night. How does this happen? Who knows? What I do know is when it's coming down to a session starting to suck. You feel it in the air. The group starts to check their phone, conversations become irrelevant, and suggestions for other activities come up.

Maybe the group just isn't feeling it that night? I can understand that happening with board games or any tabletop game. But online gaming too?

If you have ever played Battlefield with the right group, you understand how the game was meant to be played. With synergy. Support. Cover fire. Spotters. All that goodness programmed in to the game.

What happens when you have four players playing Rambo? A shit show. It happens because you have a bad group. People don't play their role. The team doesn't function properly. Or, no one cares.

You would think playing with people I know would make for a better experience. Back when I worked in a warehouse some of the guys and myself would play online. There were good days, but more often than not things didn't work out. No one was on the same page. Twisted Metal on PS3 was more hectic than it should've been. So even with people you know things can go to shit.

Everyone is laughing, and time is flying. Drinks may or may not be flowing. Depends on your group. And I would assume if you're reading this blog your group is hammered midway like me.

I seem pessimistic most of the time. Truth is, I'm not. Just getting older and quicker to being annoyed. Good groups are hard to come by the older you get. Age doesn't equal maturity.

When the right people get together magic happens. Ideas get bounced off one another and decisions get made. Instead of indecisiveness. Problems get solved and tasks are completed.

You start to have fun. Remember what that was like? Even a terrible game like UNO becomes bearable. Still a garbage game.

Strangers are like a mystery box. Never sure what you'll get. People you meet for the first time can end up making the right group. My girlfriend once took me to a party a coworker of hers was throwing. I knew a few people there. Majority of the group went to school together or worked together. Being the person I am, I made the most of situation. Had a few beers and got suckered in to playing UNO.

Turns out everyone at the party was a gamer or nerd in some way. Would've never guessed it. That night was fun. We shared stories, told jokes, drank, and managed to be civil adults that still talk.

If you don't have one, get one. Solo is great and all but meet people. Don't be a dick and get along with others. Humans need other humans. Might as well have a good time with them.

I play solo. But, I need a break from my own solitary confinement. I do that by interacting outside in the real world. You should too.