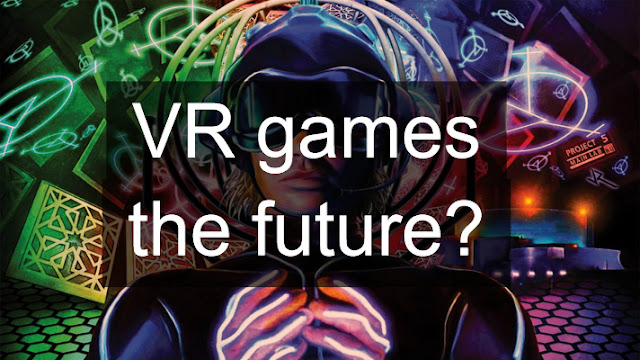 Toy's R Us is dying. Since the announcement of the company I have pushed off going to nearest store by where I live. Today I made the decision to watch a part of my childhood die.

On the upside, I was able to pick up some stuff. Recoil is one of them. I'll write a review once I get some play time in. Also grabbed some mystery boxes of anything cheap plus a board game called Love Letter.

What was left on the shelves got me thinking about how most of them had an app, then about the future of toys, and then on to the topic at hand, video games.

What is it and where did it come from? Go watch Lawnmower Man and that will sum everything up. I used to think VR was the coolest. Then I put on some Google Cardboard goggles and wasn't impressed but instead needing a seat from the motion sickness.

This surge of VR games that promise full immersion are really starting to take off. It makes you wonder if it's the future or another fad like 3D TVs.

Personally, I like the 3D on my 3DS. Fully immersed though is different. The feeling of sitting and relaxing on the couch with a controller in hand is lost when you are having to actively participate in the action.

What we have now

Sony, HTC, Oculus and many more companies are developing VR headsets for a market that is still existent. You can sit on your couch with the headset so that part of gaming hasn't changed.

How long do you think you can sit there with that headset on though? Can you do some hardcore binge gaming with it?

I don't see myself lasting long trying to game with a headset on. I'm not sure what game developers expect from the experience. Is it worth being immersed in the world or is it better to be an outsider looking in on the world?

From what I have seen, kids play with Ipads not toys. Video games may evolve into VR games completely as well. Kind of like out with old and in with the new.

Let's get futuristic and imagine some Matrix type scenario where they physically jack you in through your skin. Completely inside your head the world exists. Wouldn't even need a controller.

For now, I enjoy the physical touch of a controller. Not one of those shitty ones though.

Only works in theory 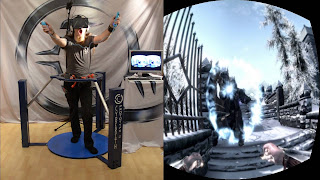 Gaming is too passive to entice anyone to stand up for it. Years ago, the thought of being inside a contraption that can take you to another world was that of science fiction or for someone insanely rich. Again, Lawnmower Man stuff.

Now that it is on its way to becoming a possibility, I don't see anyone using any of that technology. I was at an Anime convention last week and the only people interested in the full immersion demo booth were kids. Adults saw the novelty of it and passed on the experience.

I don't believe VR to be a true competitor to traditional gaming.

I may be wrong

Doesn't happen often. People may actually enjoy VR and I am just being salty AF because I get motion sickness. Or I am right, and it will be another passing fad. When the technology becomes so advance you forget you're in a virtual world might be the only time I'll start to partake. Till then I'll pass.

What do you think? Do you like VR and is it the future? Maybe you're like me and have no use for it for the time being. Let me know.

I do not condone drinking while VR'ing. You will probably vomit and I would hate for you to waste your alcohol.