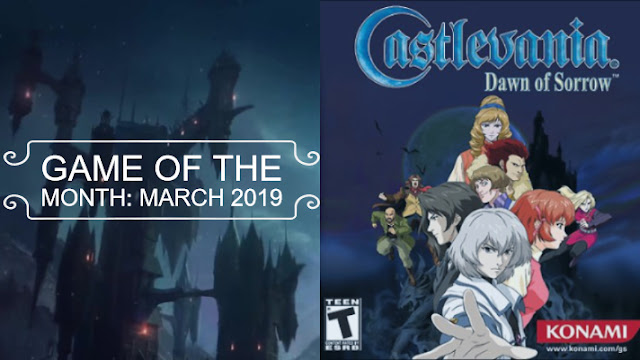 Game of the month for March is Castlevania Dawn of Sorrow on the Nintendo DS.

It's obvious I'm a fan of Castlevania. Been one for a long time. Castlevania has that awesome backtracking system that isn't annoying. What do we call that style? Metroidvania? Since Metroid follows the same style.

Anything after Symphony of the Night is an automatic going to play game. For one, that's where I started. I never played Rondo of Blood, but I did play Dracula X on PSP. The updated graphics was appreciated.

I went in expecting simple platforming, action-rpg elements that are familiar in all Castlevania games, besides the 3D ones of course - Lament of Innocence anyone? Well, I got that. Unlike previous titles in the franchise, this game is bright. 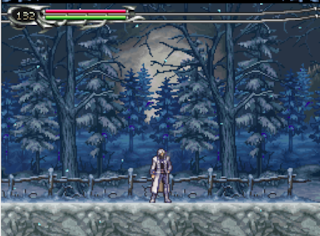 The overall visuals of the game are not as brooding and gothic as what you imagine when you think of Castlevania. This could be because artist Ayami Kojima was not doing the artwork. Several reviewers noticed the shift in art direction. Most, like me, found the anime-style to not be impressive. Konami is a Japanese company so it would make sense to eventually draw inspiration from anime art styles. Too bad we don't associate anime with Castlevania.

That's the only flaw. It doesn't look like a Castlevania game. Plays like one though. However, Konami utilizes the DS stylus perfectly with the Magic Seal system.

When you lower a boss's health to zero, a circle comes on screen with a pattern you have to trace exactly with the stylus. If not, the boss regains health and the fight continues. Did I mention it's timed? This adds a sense of urgency and concentration or you have to fight again. This breaks the traditional mold of the boss fight. 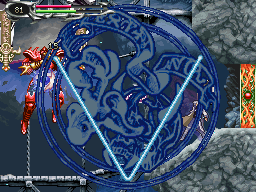 Japan sold 15,000 in the first week and 164,00 in the first three months of release. Overall sales led to Konami re-releasing the game as part of the "Konami's Best Of" line.

The average rating is 9/10 amongst the majority of reviewers online. Personally, I wouldn't rate it that high. It's a good game, but nothing revolutionary. For a handheld game, yes it's good. Compared to other titles in the franchise, no it does not deserve a score that high. Noted by Gamespot, "You can beat the game in less than five hours if you what you're doing, but you'll miss a whole of the game if you do that."

The game deserves the praise it got. Do I think it's amazing? For a handheld game, yes. Will you miss out if you don't play this? Hard to say since it was in the 2010 book "1001 games to play before you die."

If you are a fan of the franchise then yes play it.

My drink of choice has been Heineken for March. Obvious choice since it's a green beer. Ok, the bottle is green, but you get the point.