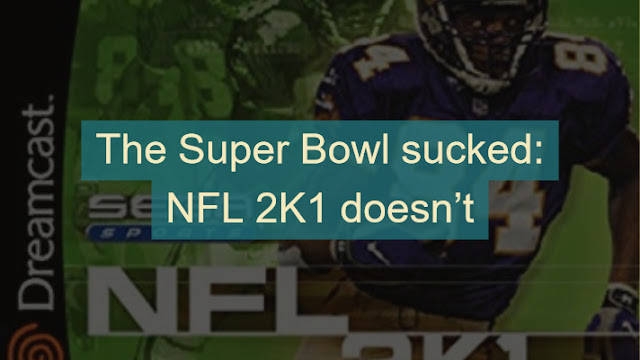 Millions of Americans every year watch the Super Bowl. I ain't one of them anymore.

I used to be big into football; I was a Broncos fan. Now, I passively watch. If my dad is watching, I might catch a glimpse on the TV from time to time.

I ain't sitting down for a full game. I've mentioned on the blog before about how I have a gig to record high school football down here in Texas. Football is a big deal down here. That's enough football for me.

But there is one football game I had to mention since the Super Bowl was this past Sunday.

This is a spur of the moment post-just had some Steel Reserve and was feeling in the posting mood-but anyways, let me get this out the way, the Dreamcast was one loud ass machine.

Or was it just mine?

I haven't owned one in years; but, I remember it sounding like a jet engine. Technically, I believe it was the most powerful console upon release at the time. True powerhouse with internet capabilities? What? Revolutionary.

The Dreamcast never could quite catch on. Instead, Playstation and N64 were ruling the console wars. Dreamcast faded into the abyss taking Sonic with it. Almost at least. 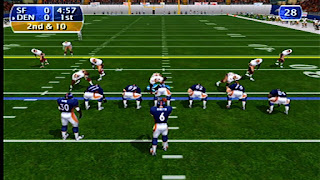 Unfortunately, there are no 2K1 tournaments happening currently unlike Madden.

At the time, 2000, Madden had serious competition. It's obvious, but I was choosing 2K. The Dreamcast failed, but the 2K series continued until 2005 with its final release being ESPN NFL 2K5.

I remember having to put headphones in to drown out that loud ass machine while I played 2K. I remember being the Denver Bronco's GM deciding on how much to charge for the New England clam chowder and what seat prices should be.

I guess I was weird for doing it, or just a bored as Hell 13-year-old with limited options on what to do in the game. Either play exhibition matches forever or put effort into making my team the greatest franchise of all time. While also making tons of money selling merchandise and hot dogs.

I highly suggest you play this game. Get a Dreamcast, get NFL 2K1, get a few Millers, get clam chowder (never had it but I sold it), and have a good time with a solid football game.