Gandor the drunk's advice corner: Don't be a dick 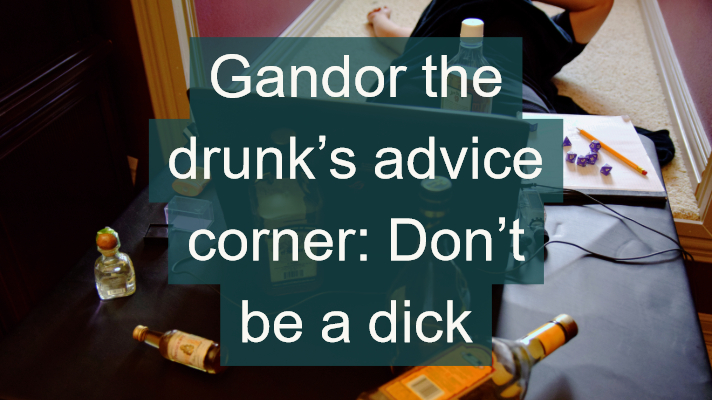 Gandor the drunk's advice corner is all about the thoughtful insight of a drunken wizard. He may slur, check out your hot girlfriend, or vomit mid sentence, but he does kind of make a point. Sometimes.

Gandor here. Let me begin by sayin(hiccup)g, welcome to my humble abode located at the top of Witch Tit's tower. How gracious of you to join me. You might remember me from such popular film's like Gandor the Drunk RPGing: A Microfilm or Nazi Werewolves from Outerspace.

Now with the pleasantry's out the way, let's get to the real issue at hand. Dick head people. Players, DMs, and everyone else.

What do I mean by dick head people?

Besides the obvious asshole that is being a jerk, there's the unknowingly asshole. These people are the ones that are obnoxious and yet to figure it out. Not everyone has comedic timing. Some don't know when the joke is over. It happens. Not all jokes work out.

But if the group at a whole has stopped giving their pity laughs, it's safe to say the joke is dead.

This can take form in many ways. Some dumb kid is yelling in the mic or for whatever reason a player thinks everyone wants to hear their shitty music blaring through their headset.
Objectives can't be completed because players decide to fuck off in the distance disrupting the game.

Same goes for RPGs. A player decides that they will cut corners completely undermining the adventure. For what purpose? To be funny? Lack of creativity to solve the problems placed in front of them by the DM? Instead they want to do a half-ass job of completing the task. Frustrating as it may be, there's not much you can do about it unless you're the DM.

Flex those Godlike muscles and form a barrier between fucking off and doing the job right. There's always a way.

Players being jerks is one thing, it will happen, but that doesn't mean you have to flex those muscles so hard you have a TPK.

If you can't control your emotions and want to be a dickhead yourself, then maybe running a game isn't for you. Keep all that power under control. Or guess what? No one is going to want to play anymore. Don't be a dick.

Fuck off. It's a game. Even if you made a living off video games or any other tournament play for that matter, get better at it. It's apparently your job to win. You suck at your job I guess. Or you don't. I don't know. Either way be a man or woman about it. Sometimes you lose. No need to get angry about it.

Yeah, you can be dick at winning too. Don't cross the line from playful joking to being an obnoxious dickhead. The same goes for you, it's just a game.

Play nice. Or don't play at all. People that are dicks take the fun right of everything. Not every joke will land, but if you have a record of crickets chirping after your "punchlines," you might be the dick of the group. Reel it in some. K? Tone it down and stay focused.

Sore winners and losers are one in the same. Don't be a dick. Dm's, be the bigger person.

For now, this is all I have. It has been a pleasure speaking with you. Till next time, enjoy your drinks and game on. Bitches!! (Does rad ass back flip on to a pile of bones then vomits all the hurricanes he drank will saying all this.)