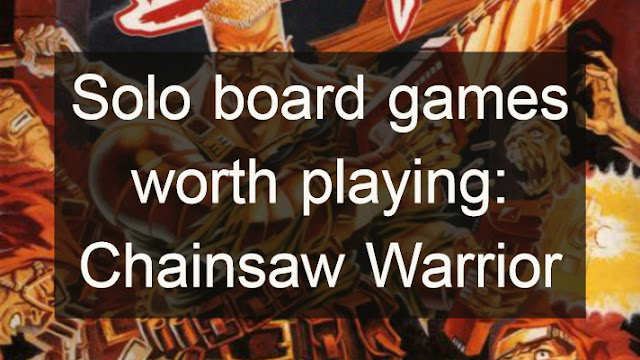 I am starting a series of board games that are either designed for solo play or variants of a multiplayer game meant for solo play. These posts will be not only my review of the game but my recommendation to play them.

It can be difficult at times finding a game to play. I know because that seems to be the position I'm always stuck in. With this series I hope to spark some interest in games I have enjoyed.

The first game I want to highlight is Chainsaw Warrior.

Released in 1987 by Games Workshop, the same company that made Warhammer, as a single player board game. Imagine Doom as a board game. Chainsaw Warrior was released 6 years before Doom though. Which is impressive to think about since Doom set the mold for badass weapon wielding monster slayer. Or at least that's what I thought. It turns out the blood splattering gore was in players imagination before it was on a screen.

I played in Tabletop Simulator on Steam. Free if you can find it in the workshop.

The year is 2032, and a warp has opened in the middle of municipal buildings in Manhattan. The main antagonist, Darkness, has unleashed a horde of grotesque creatures through the warp to destroy our world.

The main character must come out of retirement to battle the horde and destroy Darkness before it destroys us. Doom-esque. Simple plot of ass kicking. The hero is equipped the latest technology in weaponry to defeat enemies.

There's a catch. The hero only has an hour to get through the building Darkness has made home. Stakes are raised with the clock ticking away precious time.

Set up is completed in 5 minutes. The board is straightforward as to where place cards. Yes, this is a deck building dungeon. Draw cards to build out the building, draw enemies, and draw equipment.

Character creation is simple with die rolls for various attributes. For me that is plus that reminds me of other RPGs. Each game will have a different character to play with that has its own strengths and weaknesses. Starting equipment is randomized as well. Again, each game will be different. Randomization adds to the replay value. This is one of the few times I don't mind luck of the roll.

As you progress through the game, the effects of zombie venom and radiation damage will be tracked. No matter how much of a badass you are, damage will take it' s toll.

The player can lose the game by taking enough damage, running out of time, or failing to kill Darkness. I have played a few rounds and have yet to defeat Darkness. That doesn't keep me from wanting to play again. 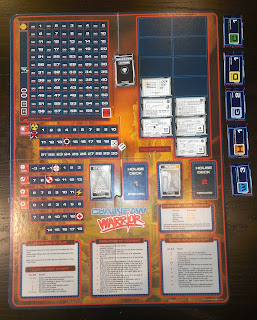 The artwork reminds me Doom, Duke Nukem, and all the other 90's cliché heroes. Enemies have grotesque looks to them that only adds to the overall feel. The room cards are average. Nothing really detailed sticks out for me. The board itself is a simple design. Weapons have unique looks to them. The dark vibe is apparent.

The rounds I played were intense. Rules took a few reads to understand. Could have been the beer I was drinking that kept me from understanding. Set up was quick. Character creation was easy since there isn't as much as a RPG.

Once I got going the flow of the game became smoother. I enjoyed the experience because of previous FPS imagery helped fill the gap in my imagination. With board games you are left to your own design. I could imagine classic FPS games the whole time.

I suggest this game as a break from other solitaire games because of the urgency of time. The time mechanic adds a new level of difficulty. The intent of the Darkness and its horde is to slow you down. As you play, you start to think Darkness is controlling the draw of the cards. The odds become stacked up against you.

I channeled my inner Duke Nukem while playing and enjoyed beer while playing. I would pair Coors with Chainsaw Warrior. IF you die like I always did, then it won't matter because you'll probably be drunk anyways.