Monopoly the card game: kind of better than the original 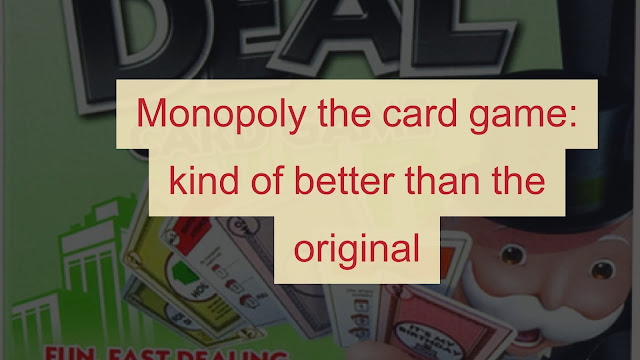 This past weekend my girlfriend and I had to do some pet sitting. Fortunately, the person we had to pet sit for lives in the best neighborhood in town. Needless to say, the house we stayed at was way better than ours. Although technically my girlfriend was working, it still felt like a vacation when we stayed there.

We ordered take-out and I had a few beers while pushing off some work I was supposed to do. My forward-thinking girlfriend brought along some games from our collection.

Now, this is the second time we have played Monopoly the card game. The first time we played was rough. We got the hang of it after a few games, but that was months ago. We had to reread the rules and interpret the best we could. There's not much info out there for this game.

After reading the rules a few times and starting a round, everything started to come back to us.

Object of the game

If you are familiar with games like Gin Rummy, Phase 10, and others where you're trying to build "runs," then you'll be familiar with this ruleset. The object is to match runs and score points, "money," at the end of each round. The goal is to reach $10,000 before your opponents.

All the cards are based off the Monopoly board game in some way. You are dealt 10 cards and you want to match colors with the number of required matching cards. Some matches require a run between 2-4. higher the number more money is earned. You're matching street name. Just like McDonald's Monopoly. Each run has a determined amount of money you can make. You can add houses and hotels to each run that pay out even more for matching runs. There are additional modifier cards that add to your total.

You can only lay down your runs once you have all the cards in your hand match. If you have 4 of 4 but another run has 2 of 3, you cannot play all your cards. At any give time, you may not have more than 10 cars. So, holding out with all your runs completed is one strategy to maximize your hand total. Once one player has laid down the round has ended. This is where another player can be screwed. If you do not have all your runs completed, you earn nothing.

With 2 players, you can end up in a standstill Uno style. Each player will draw, discard, and trade till they get that one obvious colored card. More than once a round ended with no one scoring because we drew till nothing was left.

Drinking game only. Die-hard fans of Monopoly will enjoy this variant. We aren't even sure how we got a copy. It just appeared one day. If you never come across it, not much of a loss. Better than the original because of its faster gameplay but feels like another cash grab that could easily use any other theme.

Play with beers if you somehow are subjected to this game. I had Lone Star while we played. Made it bearable for sure.