WWF Attitude, one of the better wrestling PS1 games 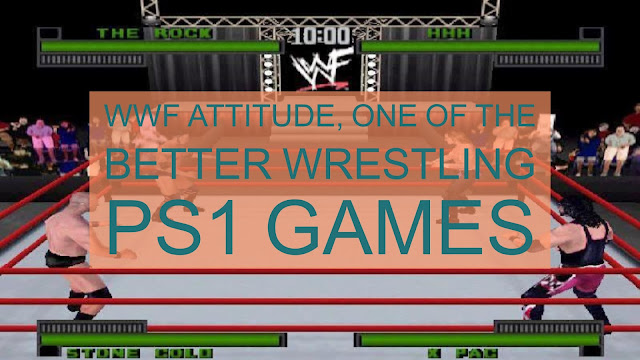 The year is 1999, and the new millennium is right around the corner. WWF was taking the world by storm with its Attitude Era. Another bias claim by me, but the Attitude Era was the best. Stone Cold, The Rock, Undertaker, Triple H, Mankind, and all the other great wrestlers that fought the good war, the Monday Night War.

WCW at the time was WWF's main competitor. The Monday Night Wars were waged with viewers in the middle. Each company fought tooth and nail to grab more viewers. For me, WWF was the superior company. WCW always felt lower budget to me. The characters were never as good nor the storylines. WWF pushed the envelope week after week. D-Generation X played a huge role with that.

But, the biggest draw of them all was one man, Stone Cold Steve Austin. I still fear that man. I'm an adult now and I probably still wouldn't look him in the eye. Beer drinking, ass whooping, son of a bitch. I fear and respect him.

WWF Attitude, one of the greatest 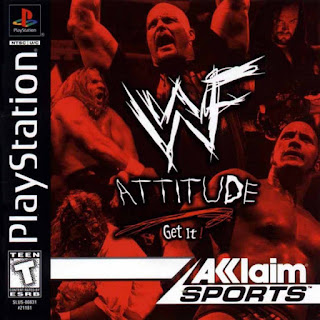 Stone Cold was the main character I always picked on WWF Attitude. Next to Kane, "The Big Red Machine." Not even sure how I got the game. I'm glad I owned it though.

Released July 31, 1999, it was the last game published by Acclaim after ten years of partnering with. Acclaim went on to publish two ECW games using the same engine as Attitude. I played them as well, and you can tell it’s the same game just different stages and characters. Maybe that's why I like them also.

Controls are stiff and clunky. Hit detection is off sometimes. Each character has their own move set with their signature finishers. If only characters moved smoother. Everything feels slowed down even with strikes. Not unplayable though. Once you figure out your character's grapples, things get better. Some moves are stronger than others. Trial and error will tell you what to use most.

The graphics were fine at the time. Not so much now. You can distinct each character from one another so that's a plus. Entrances are close to the real ones, except for a non-working titantron and stairs instead of a ramp.  Before the match, characters have a pre-recorded taunt they deliver. Cheesy as hell is the best way to describe them.

Other than menu music, there is none during matches. Instead, you get cheers or boos, commentary from Shane McMahon and Jerry Lawler, random phrases from the wrestlers, and the occasional shoutout from the crowd. Play with the sound off and your own music in the background. Do yourself the favor and don't listen to the game. Unless, you want to hear that random person in the crowd say something that will make you question why you’re even playing.

Still one of the best

May seem like I don't like the game. Actually, I love the game. For whatever flaws there may be, it makes up with being a blast to play.

Nostalgia is not the only selling point.

Yes, you do stroll down memory lane when playing. Here's a story on what comes to mind when I play.

When I was around ten, my cousin and I played this at his house. We were on the edge of our seats when we couldn't get a pinfall off each other. We made so much noise everyone in the house came running in. They stayed to watch. Kick out after kick out. Finisher one right after another. My cousin kept hitting those chokeslams with Undertaker, I fought back with Stunners from Austin.

Then, right when I thought it was over and Undertaker finally laid me down to Rest In Peace, I kicked out at what was the longest count to two ever.

We were both in the dark red. I kicked straight to the gut and within a split second hit a stunner. I got the three count. Everyone was stressed out and on edge.

My uncle asked to play when the main menu screen came up.

Making memories like that are another way a game can be "good." As long as its playable and you have fun playing, than any game can be good.

This one is best played with another wrestling fan. Only they can truly appreciate this game through its flaws.

The best beer to pair well with Attitude is Coors Light. Anyone who knows when Stone Cold hit the Corporation with the beer truck will understand why.