Ace Combat: The Only Way To Get Me To Fly 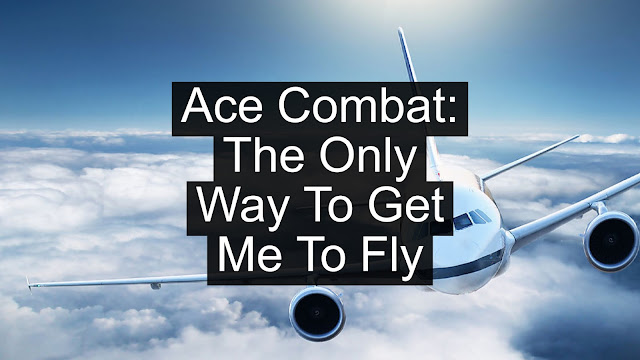 Let's be real here for a second. I'm scared shitless of flying. The first time on a plane I was like a cat in a car. Not only that, but I didn't know planes gave me motion sickness.

I'm 30,000 ft in the air nauseous and terrified to death. What made it worse was we were flying over a storm, so the turbulence was intense. I nearly broke my girlfriend's hand from squeezing it.

I'm man enough to admit how terrified I was. No shame because so many others are just afraid. I faced my fears and got on the plane. The movies always make it seem like it's no big deal, just a sky bus. I was very wrong. Never been more wrong in my life. The trip to Las Vegas was worth the flight.

Now on the way back it wasn't.

I sat between two strangers because the way the seating was set up my girlfriend and I were split up. She sat directly behind me. The guy to my right slept the whole time like we weren't going 400 mph above the clouds. The guy to my left was as cool as a cucumber. Everyone was. Well from the ones I could see.

Landing sucks. You come crashing in. The first landing I think the pilot had to use the restroom because he came in hot. Pilot two on the way back home wasn't as aggressive. Still was bad for me.

What is weird is how I'm terrified of flying but love flying games. The Ace Combat series, and specifically Ace Combat 4 on PS2. Something about aerial combat gets me off.

Namco released Ace Combat 4 November 1, 2001. The first in the series to be released on the PS2. AC 4 was critically acclaimed with IGN giving it a 9.1 out of 10. I agree with this high of a rating. I spent countless hours playing this game.

This was my first introduction into the series. The box was definitely what influenced me most to get the game. My previous experience at the time playing an aerial combat game was Warhawk on PS1. 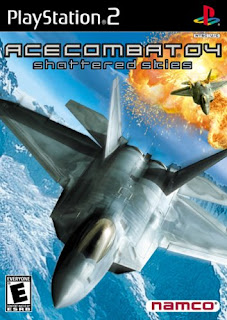 I'm just going to come out and say it. Fuck Warhawk. I want to do a post about adding Warcock to the list of games that can go fuck themselves.

Had to get that out the way. As you can tell I'm still pissed I wasted my choice for my first PS1 game when I got the console for Christmas. With that bad taste in my mouth, I was surprised I decided to go down that path again.

It was worth the risk.


The PS2 hardware was used to the max for this game. Or at least it looks that way. I've gone back recently and played this game. Let me tell you, coming from PS4 back two generations and this still holds up. The land is flat texture but is not muddy like a PS1 game. All the aircrafts are distinguishable from each other. What is on the ground can be determined as to what it is. Structures are not blended into the ground as other games would be. If I remember correctly, there were lens flares. For what reason, I'm not sure. If they are in there, then they add additional points for cinematic creativity. 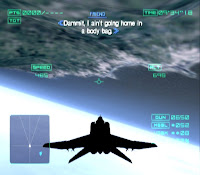 You're flying a fighter jet. But, it feels intuitive. I've played flying simulators on PC and I can tell you this game is more of a mix between sim and arcade. The perfect balance for good gameplay. There is getting used to since the majority of people are not familiar with flying an aircraft. Namco found the balance. The feeling of boosters engaging is there. Slowing down will cause you to drop from the sky so there is the element of realism. You are the pilot and feels every bit that way apart from steering and making precision maneuvers. Evading rockets is possible with enough practice.


The OST is not my cup of tea. The music is good. I couldn't imagine any other music played. Well, maybe something more than Namco stock music. Dogfights were not meant to be fought with easy going music. I've never been in one personally, but I would imagine the heat of battle would call for something less video game generic.

A cross between arcade and sim Ace Combat separates itself from other aerial combat games. Do I dare say sets the standard for them? Possibly, yes. Aerial games always seemed to be top-down or side scrolling shooters. Starfox on Nintendo doesn't compare either. Namco capitalized on a lacking genre. You feel in control of these jets. Like an actual pilot. Each one plays differently and depending on which mission each jet has its purpose. Dogfights require skill. Unlike Contra, you're not going in guns blazing. All the weapons feel useful. Your primary rocket will be the most used next to your trusty machine gun.

The game is easy to pick up and not invest too much in. Honestly, I don't even know if the game has a story. If it does, tell me something about it in the comments. You can just jump into the missions and get going immediately.

There is a money system that requires you to purchase weapons and new jets. Through gameplay you earn the money after missions. Performance rewards extra income. You are also allowed to sell off jets/weapons to make room for better replacements.

Ace Combat, as a whole, is different than most games out. Not often are you given the opportunity to be a fighter pilot in a world you probably won't know much about. Seriously, what is going on those games? That is the only flaw. For me at least. The story is not interesting, or it was never presented as interesting to me. It probably is.

You may not be able to drink and pilot in reality, but at home it's acceptable. I suggest pairing a classic cocktail. I can only reference commercial airplane pilots at the moment. They are what comes to mind first. I'm assuming they drink cocktails. I watch a lot of movies if you couldn't tell before. If anyone reading this flies jets, please tell me your drink of choice. I'll update this post with your recommendation.


Enjoy your drinks, and game on.