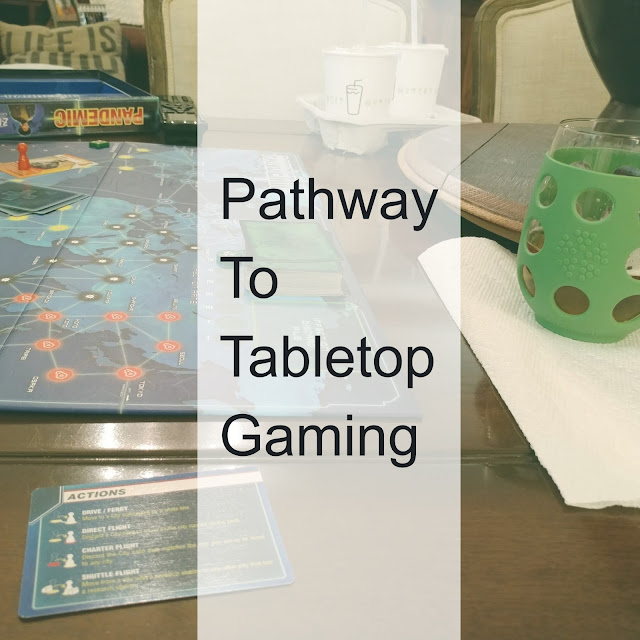 Tabletop gaming is no longer taboo. Nerd culture has been embraced and games like DnD are mainstream. Right now, is the best time to get in to the hobby. I can only tell of how I started.

I have always had an interest in board gaming but with no one to game with. Fortunately, I was able to get my girlfriend to try Pandemic with me. Cooperatives games were new to me and I did not know they existed. With cooperative games I think it makes it easier for people who are hesitant to play more able to enjoy the experience. Introducing new games to someone is a task because everything is new to them. You will have a new set of rules to try to explain. Then you are competing against them and cannot offer advice because it disrupts the flow of game play. That will only leave everyone confused which leads to frustration and eventually turn someone away.

Cooperative games like Pandemic with light rules are easier to explain. The first tabletop game someone plays should be easy. There are other board games out there that some may argue are better picks. I stand by mine. Each turn you are given four actions. It also helps that included are cards with all the actions possible making it even easier to know what you can and cannot do. The game can get overwhelming fast with outbreaks occurring randomly.

Players will be forced to work together as they try to find a cure for each of the four diseases. Character abilities can alter the rules of gameplay but will not be confusing as they do not cause rules confliction. Anyone familiar with DnD will understand how that goes. None of my playthroughs have been difficult. Nor have I won all my every game.

But, when you do win, there is a sense of accomplishment because the odds are stacked against you. I would go as far as to say luck may play a huge rule in whether or not you win.

A plus for this game is the constant release of expansions. Not including all the spinoffs. There is a lot of content out there for this franchise. From including dice to being card based, Pandemic has multiple varieties for different gameplay.  The developers found new ways to keep the franchise fresh.

I recommend Pandemic to anyone just getting in to the hobby. I have other suggestions but for now I think this would be a good start. This game is best paired with a light beer. Miller Lite is my drink of choice for when I am trying to save the world from a Pandemic.