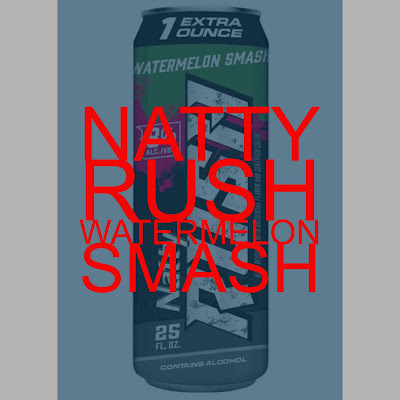 Natty Rush is amazing! As a man I have nothing to prove to anyone. I will drink a fruity drink and do not care who knows at the same time. They taste sweet with little bitterness. Drinking does not always mean you have to make a disgusted face when you indulge. Hitting the market late October, it has not had much time on shelves. It replaced Steel Reserve's Hard Pineapple for me. Watermelon Smash is the only one I have had but I can tell you it is like a watermelon Jolly Rancher.

Natural Light is competing with Steel Reserve and the infamous Four Loko. I can think of better ways to get alcohol poisoning besides drinking Four Loko so I always pass on it.

Steel Reserve has been my top choice for inexpensive fruit flavored beer with good taste. Most stores around me sale Steel Reserve for $1.89. At QuikTrip you can get Natty Rush and Natural Light for $3.33. I like to stagger my ABV. Always start with an eight percent then go down. No longer feel as hungover the next day.

The first title that comes to mind for pairing with Natty Rush is Yoshi's Island on SNES. Miyamoto's art design took what the first Super Mario World had and made it more cartoonish. Brighter colors with more of a whimsical feel. Maybe Mario being a baby influenced the art design? Creativity over technical graphics won this battle. Donkey Kong Country showed what the SNES could do graphically, yet Miyamoto stood his ground against Nintendo’s marketing and got the look he wanted. A minor character was given the spotlight and to this day that game still receives praises.

My only complaint is Baby Mario's crying. I can hear him now in the back of my head as I type, and it is driving me insane. With how amazing the game is his crying can easily be drowned out. Using the Yoshi’s eggs as projectiles added to his arsenal besides his signature tongue. This mechanic later carried over to more titles featuring Yoshi.

Secret of Mana is the next title I picture pairing well with Watermelon Smash. Game play is much different from Yoshi's Island being that is an action adventure RPG. Square Enix moved away from turn based game play like their famous Final Fantasy franchise.

The character design is generic, almost as though they were unused character models from previous Final Fantasy titles. The game mechanics are solid with varying weapons. You can control the party and their behavior when it comes to attacking or defending. It is useful when wanting to take a more cautious approach to enemies. Having to charge your weapons for optimal damage kind of gave the game a turn based feel. You could not just smash the attack button but instead time your actions. That game mechanic made for a different challenge.

One of the best features is that a second or even third player can take over one of the characters and then exit, leaving the AI to take back over. Gives use to the SNES Multitap.

These two video games pair well with Natty Rush. They are both colorful and easy to pick up and just enjoy without too much effort or investment. I will have to try the other two flavors and see what comes to mind. For now, these two tall cans are not going to finish themselves.