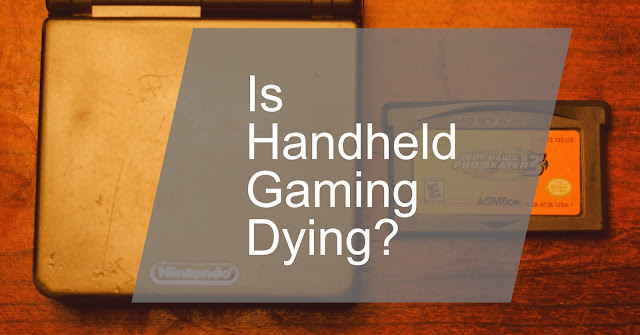 When I say handheld gaming I am talking about dedicated consoles for portability like a Nintendo 3DS or PlayStation Vita. Not smartphones. That is a different topic for a later post. For now I want to talk about handhelds in general. Pardon my rambling as the drink I made for this post was strong.

Although I want to stay away from talk about smartphones but I feel like they are playing a huge role in the death of new handhelds. Not to be misunderstood as there is nothing wrong with mobile gaming. I will get in to another discussion about that at another time. With the capabilities of what are phones can do now it is easy to see why it is replacing another device. Think of all that a smartphone can do and while your'e at it think of the devices it has gotten rid of currently. What need do we have for dedicated machines when we have all that we need in the palm of our hand?

My first handheld was a Game Boy Pocket with the Animaniacs. Eventually moving on to what is still a huge part of my life, Pokemon. It was only natural progression that led me to an Advance SP and 3DS.

During the first wave of Pokemon craze I can remember sitting on the couch with my AC adapter plugged in to the wall exploring the world of Kanto. Fond memories of straining my eyes and neck just to get that next badge. More than a decade later and I am exploring in 3D in an office chair. The upper hand a dedicated console has over my smartphone is battery. I live my life on the internet or in some way digitally. I have to stay connected to people and low battery on my phone is going to keep me from that. With a Game Boy I do not have to worry. 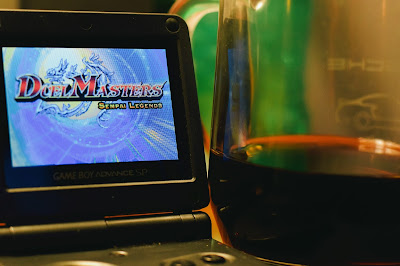 Mobile gaming does not give you that sense of getting lost in a world. Go to your app store and find a game as enthralling as Legend of Zelda. Games being designed now are for fast on the run gaming. More marketed towards the casual gamer not looking to get too involved. Even the nefarious micro transactions play a huge part. Not to truly experience a compelling story or game play. Just something to pass the time. I understand video games accomplish the same goal but why not feel something along the way? We get lost in stories and we create memorable moments following the hero's journey. I would love to be told I am wrong in my statement and be shown some good mobile games full of adventure.

My go to handheld now would have to be my Nintendo Game Boy Advance SP. The states received it in March of 2003. I was late to the party only recently getting one in my possession two years ago. Lightweight, compact, long battery life, amazing graphics, and a long list of great games is why I keep coming back to it. I have a carrying bag with all my cartridges in it that I take with me. Not everywhere because let's be honest that is a bit too much. But if needed to kill a small of time I can throw the console in a pocket and have full portability with no hassle. I sit in my chair and pair my SP with something like Heineken. Heineken is foreign as is my SP. Tall cans only.

Games are inexpensive for physical copies of games. I have bought games for my SP as low as $3.00. If I can buy a forty for $3.25 and Tony Hawks Pro Skater 3 for $4.00. That's $7.25 of pure entertainment. Granted it is best I do not have both of those together in public, but nonetheless I can have some fun for cheap.

Fortunately we live in a time where we have tons of retro video game resellers. We have a huge trade market because of collectors. Don't believe me? I have been to Austin, Texas for their Classic Game Fest. The convention was full of vendors, cosplayers, and video game inspired music by local bands.  I am afraid that new handhelds will go away due to lack of sales and support. Retro gamers will keep handhelds relevant especially with homebrews and trading. There is a light at the end of the tunnel for consoles of the past. New Pokemon titles can only keep the sinking ship Nintendo has afloat for so long. Even Playstation axed their handheld line. Only rumors of whether or not we will see a PSP 3. I would get one if it was being released. But for now we do not know.

My point is that handheld gaming should not be forgotten. I am sure people in my age group are familiar with what we have had and understand the impending doom we face. We are losing a part of us. When Pokemon Go came out I am sure others felt like I did and reminisced over days past. The future generation has the Nintendo Switch but realistically it is not dedicated to handheld gaming. I prefer the actual consoles versus some port on a mobile device. I want to play the game it was meant to be played if given the opportunity. Not everyone is a purist like myself.

I say go out and get a classic Game Boy and play the games the way they are meant to. Even better introduce those classic titles to a new generation of gamers and let them experience what we have. Older titles were simpler with sometimes only two buttons. Smaller children will enjoy them and help pave the way for them to advance to more modern gaming.

Game on and enjoy your drinks.