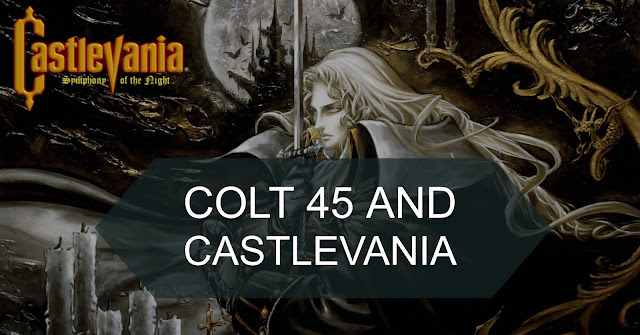 Two tall cans and a castle that belongs to Dracula himself. SoTN is a PS1 must own.


There are times when I want a classic. Colt 45 is a classic. National Brewing Company is the original brewing company for this beer. This amazing company was in business from 1872 to the late 1970s and eventually being bought out by the Pabst Brewing Company. Brewing for Colt 45 started in the spring of 1963 and was one of the few major malt liquors in store. According to Pabst, Colt 45 is based #45 Jerry Hill of the 1963 Colts and not of the .45 caliber handgun ammunition.

This classic drink pairs well with a classic system like the PS1. Castlevania Symphony of the Night is what I am playing while I enjoy forty ounces of kick.

Konami hit the nail on the head when they designed SoTN. Gameplay, character design, game mechanics, and even the music is perfect. What appeals to me most is the main character Alucard. For those that do not know, spoiler alert for a twenty-year-old game, it is Dracula’s Son. Not sure how obvious Alucard is Dracula spelled backwards. Konami wanted to be on the nose with that name apparently.

Alucard comes back home to kill his father. Simple enough. Wide variety of enemies and the boss battles have just enough challenge not to be frustrating. Stiff controls but with the addition of magic there are other ways to attack. Customization is in the game as is expected with a RPG. Dracula’s castle is mysterious as he is with all the hidden secrets within. The level design feels like the castle goes on forever. The music is phenomenal. I still listen to the soundtrack by itself on Youtube. If you decide to do that as well, make sure you are listening to the extended versions.

Normally a malt liquor is paired with a first-person shooter. Preferably a series like battlefield. If K/D ratio is not your goal and fun is instead than yes opt for the forty. The music of SoTN and Colt 45 mesh so well that leaves you in a calm relaxed state. The game has been around for so long that at this point it is not to be taken too serious. If you uncover everything you will not unlock an achievement or gain a reward.

Enjoy the game for the classic it is. Grab a forty and sit back. Play this game with headphones on if you can and get lost in this gothic paradise.